SeeMore has many admirers around the world. Among them is Mat Brown from NYC via the U.K. We love his enthusiasm and he does a great job of capturing the energy SeeMore brings to exhibits for folks of all ages. Thanks Mat!

Our thanks to MagPi Magazine and the Raspberry Pi Team for recognizing SeeMore as the #2 top project (and world’s largest cluster) for the Raspberry Pi. We are so proud! If you want to read the article, have a look at Page 39 of the October 2016 issue of MagPi magazine. 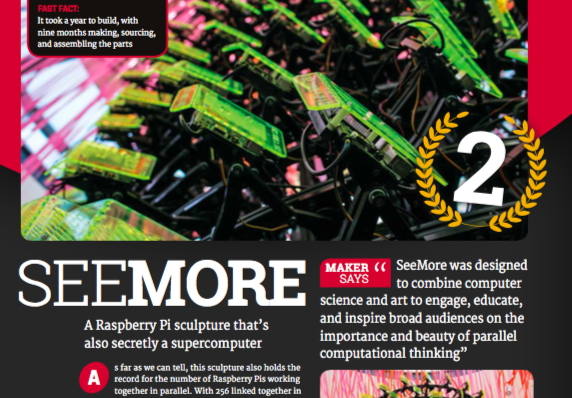 This 6.5 minute video captures the 12-18 hours for 3-4 people of assembly and testing needed for SeeMore to come online. This video was shot in Austin, TX at the SXSW 2016 Tech Expo. SOVA students lead construction while CS students help with assembly and software testing identify nodes for replacement as SeeMore is assembled. SeeMore was the star of the show floor at SXSW attracting thousands including astronauts and international media (see second video).

PI Kirk Cameron shot this video of one of the first fully functional runs of the Parallel Wavefront Algorithm on the 256-node SeeMore cluster. You can hear the excitement in the room. John Mooring, an CS@VT undergrad, can be heard on the speakerphone. He completed the synchronization of the beautiful SeeMore Vancouver interface remotely just after he joined Microsoft in Seattle. The SeeMore Vancouver Interface (second video below) runs in sync with a different map-reduce algorithm on SeeMore (not pictured).

This is a 5.5 minute video created by the wonderful media folks at SIGGRAPH 2014 to highlight SeeMore’s debut. Sam Blanchard, artist and aesthetic designer of the SeeMore sculpture provides a narration. Sam covers design decisions we made both on the CS-side and the artistic-side.

This is our most popular video that has been viewed over 20,000 times on YouTube. This is the first functioning wavefront algorithm running on the 30-node Raspberry Pi prototype in 2014. CS Student Bo Li provides the narration and shot this great video. Very exciting!

This 3.5 minute “making of” video shows PI’s Kirk Cameron and Sam Blanchard discussing the conception and construction of the SeeMore prototypes, 30-node Lil’ SeeMore, and the 256-node design. Our thanks to the Virginia Tech production folks for this high-quality videography!